The far left has perfected the art of riots. We are beginning to observe flashes of a full-out insurgency, in which the far left has been hard at work for decades. The death of George Floyd in Minneapolis was simply a pretext for radicals to push their ambitious insurgent agenda… 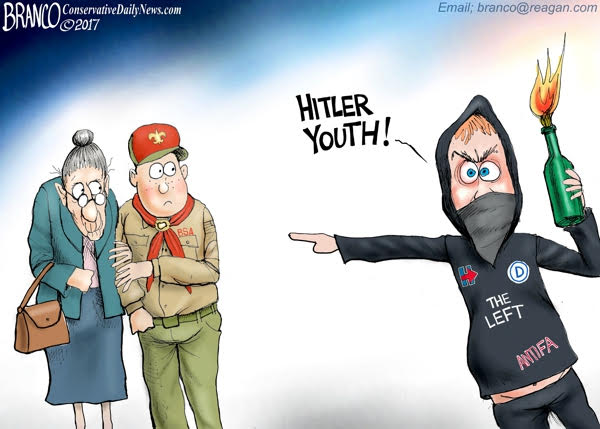 In a matter of hours, after Floyd’s video began spreading throughout the Web, the militant Anti-Fa (so-called “Anti-Fascists”) cells from across the country began to mobilize to Minnesota to support the Black Lives Matter (BLM) rioters. Police and even the National Guard in the State of MN had been unable to respond. Portland, Oakland, Los Angeles, Dallas and Atlanta were only a few of the cities to wake up to smoking ruins where factories, industries and enterprises (mostly capital power-houses) used to operate. In that first wave, almost another 30 cities experienced some sort of mass protest, social unrest or violent revolt. At least 3 people were brutally murdered in the first few hours…

Anti-Fa, the far-left Anarchist-Communist movement, have become criminal artists. The first broken window is the blood in the water for figurative sharks in the shapes of inciters and incendiaries to move in and finish their job. When a riot takes place, those transporting flammable chemical products set them ablaze and start fires; hence, the job is done. The videos recorded in Minneapolis and other cities display trained militants outfitted with the black clothes of the Anti-Fa uniform (as well as T-shirts with the faces of “Che” Guevara and Hugo Chávez), wielding weapons like hammers and shovels to break windows and cause chaos. Their graffiti are visible over wrecked buildings: FTP means “fuck the police”; ACAB means “all cops are bastards”; 1312 is the numeric code for ACAB, and has now become viral.

A few nights ago, anti-socials, agitators and firebrands reached the gates of the White House, possibly the safest place on Earth, where they disassembled the outer fences –law and order forces struggling to respond. According to reports, one Secret Service officer got hit in the head by a brick that night. The on-site recordings show him bathed in blood. Police finally was able to repel the masked rabble-rousers by means of pepper gas and tear gas. That did it for a while…

Rebels throughout the country want a revolution and they do not care what or who has to be destroyed in the process. If their comrades are put down, they are glorified as martyrs in their red propaganda. They see death as reason for celebration.

In essence, BLM is a Marxist-revolutionary ideology. Alicia Garza, Opal Tometi and Patrisse Cullors, founders of BLM, are self-proclaimed Marxists who pridefully display their idolatry of terrorists and Communist fugitives, like Assata Shakur. They mean to push forward the abolishment of the exercise of law and aim to overthrow Capitalism. They demand a change in the status quo, to put an end to the current government in the United States, as well as the rule of law, even worldwide. Anti-Fa and Black Lives Matter have allied themselves (for now, for all devil-worshipers are backstabbers in the end), seeking to create the critical mass they think is needed to accelerate the collapse of our modern society –and already decadent cultural norms and traditions.

The USA is merely witnessing a small preview –the tip of the iceberg– of the anarchy that Anti-Fa will unleash and has been agitating, training and preparing for many years. To put an end to the rule of law is a pre-condition for Anti-Fa and BLM to monopolize violence. The first to become affected are the weak and vulnerable, those that cannot protect themselves. Owners of small businesses in MN begged for mercy, and even posted billboards and signs in favor of the DEMONStrators –all in vain.

The utter destruction of the means of capital being witnessed across the United States of America is not mere opportunism (on the side of looters). It plays a critical role in the Anti-Fa and BLM ideology. It’s objective, now widespread and widely known, is to abolish Capitalism. To accomplish that, they have to make economic recovery impossible. The Anti-Fa predators gaze a unique, one-in-a-lifetime chance for a prey –to exploit the weaknesses America is currently suffering due to the coronavirus pandemic. “It’s Going Down”, one of the most popular blogs in the States, tweeted on Friday: ‘In 10 years, people will not look back and ask: “why did it explode in 2020?” Mass unemployment while the rich and powerful obtain thousands of millions of dollars in tax cuts + subsidies, Earth on the brink of collapse + police kill people daily. No, they will ask: “Why did it not happen sooner?”’

Anti-Fa has been taking actions considered as extreme even among their own ranks. Some nights ago in Portland, protesting thugs surrounded a vehicle full of passengers and opened fire on it, critically wounding a person inside. The driver was able to escape, but the wounded passenger was rushed into a hospital to be treated. In Oakland, there was an ambush in front of a government building under custody by two federal policemen; they were both shot, one to death, while the other sustained critical injuries. On the next day in Seattle, masked Anti-Fa militants stole a rifle off of a police vehicle before setting it on fire.

The media, those in politics, the people… all of us have underestimated their training and capabilities among far-left extremists, currently united in their foul purposes… Every bit and piece of a riot has a purpose. Looting and fires destroy local economies. Disturbances and uprisings can overwhelm the police and even the military. All of this leads to deep-seeding, long-lasting de-stabilization with grave consequences. America is brave and beautiful, but it is not utterly invincible. Americans best start appreciating their Nation more, least they end up like us Venezuelans. God bless America, and long live their All-Providing Capitalism, Individual Freedoms and Common Liberty. In the Name of Jesus, our Yahweh Jireh, AMN.